Hey Team! It's time for more free stuff! I have built a new tool called TraceMON. TraceMON is a route monitoring tool. Why would I need this you might ask? Because it can help you get to the bottom of many internet related issues, and I think it looks cool while its running. Many times one website will take a long time to load but others will load almost instantly. Why is this? Because the internet is global and the route your computer takes to reach one website might be totally different than the route it takes to reach another. This is where TraceMON comes in. Not only does TraceMON discover you route to a website, but TraceMON then monitors every single hop on the way continually so you can know exactly where the slowdown is. 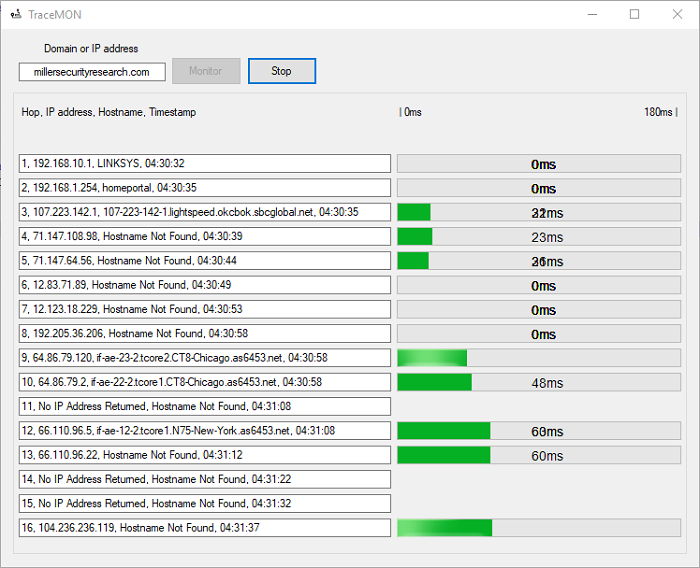 Traceroute is not a new tool to the IT industry. What TraceMON does is build upon it. As a typical traceroute competes it gives you the time it took to complete the request to that hop, this can be deceaving as it only displays the latency of the hop at one point in time. TraceMON will instead continually ping every possible hop along the way and display the latency of those connections in real time so that you can easily visualize latency at any hop on your route towards the desired website. Also as always the full source code is made available as well; you can look at it yourself by clicking here.
Updates

1.0.0.3 - Recoded the self updating mechanism and made more changes around moving to Visual Studios.

Alerting - Soon you will have the ability to play an audible alert tone if a certain latency threshold is met.