Keeping with the DIY nature of this entire endeavor I have made a tool called "Ping Scanner". Why call it exactly what it does? Because it have no imagination. What does it do? It simply sends pings out to a range of IP addresses you set and outputs their responses to a file. When attacking a company's public facing servers or after you're on a company's network, you need to have a way to determine what other machines are also online. That's what this tool will do. 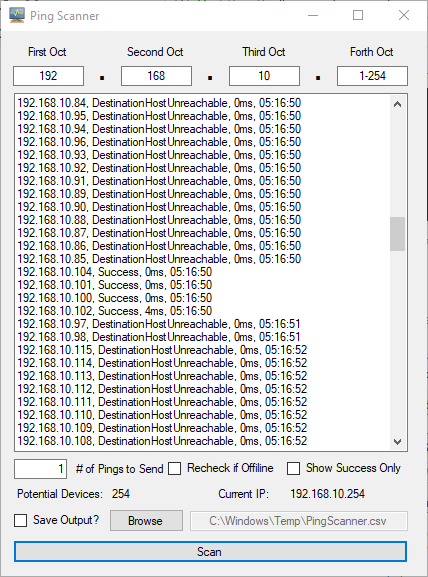 When the tool loads it gets an IP from your system and sets the last octet of the IP to 1-254. If you hit scan immediately it will scan all the possible devices on your network network segment and return the results. Now if you set it to 1-254.0-254.0-254.0-254 you would literally scan all possible IPs on the internet, and it will probably take months to completely. Or you could just scan a range of IPs that you define. Once finished you can copy the results from the program itself, or you can save the results to a CSV file which can then be opened with Excel or LibreOffice Calc directly. Many times a PC that has been idle for a while or is asleep will still respond to pings, but because of the idle state the first ping may just be to slow to be counted. That's why I have added the recheck if offline option. When checked, a second ping will be sent to all devices that are offline. This is just a good way to double check if it is really offline. Expanding on this simple feature I have also added the ability to set the number of pings you want to send to each possible device. A standard ping test is 4 pings. The default of this program is 1. You could set it to a million if you wanted. Don't worry though, this wont DOS your network as the scanner waits for the pings to any IP to complete before it sends another.

1.0.0.8 - Fixed and issue where the textbox wasn't displaying text correctly.

1.0.0.6 - Recoded the self updating mechanism and made more changes around moving to Visual Studios.

1.0.0.4 - Fixed a situation in which offline devices would show up even when only online was checked.

1.0.0.3 - Added Hostname to the output column, as well as the ability to look up the hostname.

1.0.0.2 - Re-write of the program using the Sharpdelevop IDE. No longer an installable program, now it is a standalone EXE that doesnt not require installation. Added a Current IP status to make it easier to keep track of scans progress when "Show Success Only" is checked. Added a browse button to make saving the output easier.

There are many other ping scanners of various quality out there already. I am pretty much re-inventing the wheel with this one. NMAP is a tool that is also used for this exact purpose, except that it has about 100 times more functionality. If you are on a network already, you could passively listen for ARP packets, or inject your own to enumerate a lot of the hosts on the network. You could just listen to all the traffic and with enough time enumerate the hosts. You could send DNS requests to the networks DNS server to get the hostname of all the IPs on a network. I could keep going on, the point is there is a lot of ways this can be done. But like I said before, the whole purpose of this is to do things myself when possible. I didn't want to write another entry level "How to NMAP" article if I could help it. If you're the kind of person that likes to do things yourself as well and would like a copy of the source code and project files you can download it by clicking here.